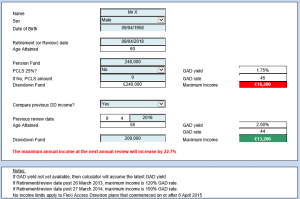 The Maximum Drawdown Income calculator provides an indication of the client’s maximum ‘capped’ drawdown income at date of retirement.
It can also provide a comparison of income from the previous review and show any change.

The calculator is only relevant for those individuals whose ‘capped’ drawdown plans started before 6 April 2015 and have not withdrawn income that exceeded the income limits. These plans still have limits on income and are subject to three yearly reviews (annually after age 75).

On inputting the retirement or review date details into the Maximum Drawdown Income calculator, it will determine the basis and tables (see below) to use to calculate the maximum ‘capped’ income available at that particular date. This income level is important because if the client takes more than that amount, they will trigger the Money Purchase Annual Allowance limit.

Clients in Drawdown Pre 2011 would transition onto the new basis at the end of their current reference period, or the next policy anniversary if they transferred. Some clients who have moved to the new basis have had a significant reduction in their income levels.